This week we received some news here in Tennessee. As of April 27th, which is tomorrow, the economy will begin to reopen. Restaurants, shops, dental offices, and other venues will be opening this week. However, that news didn’t come with huge

parades and fanfare – with balloons and a ticker-tape parade. That news came with warnings and guides for how those businesses will be allowed to open. The news was received with varying degrees of relief and confusion and uncertainty because we all know the virus isn’t gone.

What we want to hear is that the virus has been eradicated – that we have a vaccine that will protect us – and we no longer must be too concerned – at least no more concerned than we are about the flu. But I’m afraid those days are not here yet and perhaps they will not be for a while and perhaps they never will be here. What many people want is the assurance that we are protected from the dangers of the virus. But we really haven’t been offered that because a 100% assurance that we are protected from the virus doesn’t exist.

All of us know that we aren’t just dealing with a virus; we are dealing with a massive downturn in our economy – a downturn that has long-term implications. Thousands of people are out of work and as a result, many are unable to pay their bills, buy food, etc. The longer things stay shut-down the more difficult it is going to be to recover. As it is, even now the recovery will take a long time.

And, even as things open – there is no guarantee that our economy will not slip further. After all, open restaurants and shops, etc.,  are only as good as the number of customers, clients, and patients that show up. We are almost assuredly going to see an uptick in cases, which will most likely have an economic as well as societal impact. But, perhaps opening and allowing more folks to work will at least help to alleviate some of the economic hardships. But again, there isn’t a 100% assurance in that either.

What people long for – what they want – is an assurance that we are going to be okay – protected – kept safe. But we do not have that – not that we ever really did – but now we know it is for certain. Instead of assurances, the people of Tennessee (and very soon everyone else) are being invited on a dangerous journey into a very new reality but it is a journey that we must take – whether we want to or not. It is just the way it is. We have to start learning to live with this virus but – there is not much comfort in that at all.

If you, like me, profess faith in Jesus – you may not feel like you are prepared to step into the breach or be part of a dangerous journey but the Bible says otherwise. There are stories throughout the Bible that point to the fact that God calls His people to dangerous journeys all the time and it is in those moments when our faith grows deeper and it bears fruit as we bear witness to the love and faithfulness of God.

There isn’t anything new about God’s people taking a dangerous journey; the Bible makes that clear. In both the Old and New Testaments those dangerous journeys were sometimes quite literal – meaning the people had to step into the world and move across a wilderness where they faced hardships, bandits, enemies in battle, pestilence, and famine, etc. God called Abraham to pick up everything and start walking toward a promised land. He and his family faced all sorts of things along the way. Sometimes the Bible describes dangerous journeys that were spiritual and physical.

I think of Paul – when he was on the road to Damascus and he came to terms with Jesus – and he was taken on a deep, spiritual, and physical journey. His life was transformed by it. Paul literally went on dangerous journeys and faced shipwrecks, jail, and all sorts of hardships. But in it all, God was present.

David faced Goliath because he knew God was with him on his dangerous journey. David – the giant killer – the king of ancient Israel – wrote a lot of psalms – not all of them – but a lot. And in one of his most famous psalms, Psalm 23, David wrote, “even though I walk through the valley of the shadow of death, I will fear no evil, for you are with me; your rod and your staff, they comfort me.”

We’d like to think that because we are God’s people that we are immune to the dangers of the world. But the truth is, God calls His people to take dangerous journeys and the only assurance they have is that He is with them. Turns out that’s all we need. God often calls us to take dangerous journeys even though it could mean trouble or even death for us. But we need not fear; we can face those dangers because we have the assurance that God is with us. That’s the only assurance we have and the only one we need.

These psalms are called Psalms of Ascent because they were sung or prayed or spoken as people ascended to Jerusalem for a festival or for worship. Jerusalem sits on a hill and the temple is at the height of the hill – thus people would ascend. The people and priests would sing or pray these psalms as they journeyed and as they made the climb.

But here’s the thing, the journey to Jerusalem wasn’t necessarily an easy go. There were dangers on the journey and God’s people weren’t immune from those dangers. But they were still called by God to go on the journey. Just because it was dangerous didn’t mean they were exempt from going where God had called them to go. But these Psalms of Ascent reminded them that they were always assured of God’s presence on the dangerous journey. A case in point is Psalm 121.

Psalm 121– A Song of Ascents. [1] I lift up my eyes to the hills. From where does my help come? [2] My help comes from the LORD, who made heaven and earth. [3] He will not let your foot be moved; he who keeps you will not slumber. [4] Behold, he who keeps Israel will neither slumber nor sleep. [5] The LORD is your keeper; the LORD is your shade on your right hand. [6] The sun shall not strike you by day, nor the moon by night. [7] The LORD will keep you from all evil; he will keep your life. [8] The LORD will keep your going out and your coming in from this time forth and forevermore. (ESV)

In verse one, the psalmist makes the point that he looks to the hills. That can have a couple of different meanings. First, remember they had to travel up to Jerusalem. As they looked to the hills – they knew the ultimate end of their journey was at the temple – and at the temple is where God and humanity met. So, there was that. A second idea though is best captured in Jesus’ parable of the Good Samaritan.

If you know the parable of the Good Samaritan in Luke 10:25–37. In that parable, Jesus said, “A man was going down from Jerusalem to Jericho, and he fell among robbers, who stripped him and beat him and departed, leaving him half dead.” There are two things to notice from that parable. First, the man had to go downhill. Second, the journey was dangerous. It really didn’t matter if you were going up the hill or down the hill; people in Jesus’ day knew that the road from Jerusalem to Jericho was dangerous; they knew there were bandits.

But, they knew that they had to go through danger in order to get to Jerusalem – which represented for them the place where God and humanity met. They also knew that God called his people to worship and they were on a God-ordained journey that often leads them into danger. So, as people went on a pilgrimage to Jerusalem on their God-ordained journey into danger they looked to the hills and asked, where does my help come from? The answer to that question, their assurance in the midst of a dangerous journey is in God.

The rest of that psalm continues to focus the people of God on the fact that they are better equipped than anyone to take a dangerous journey. First, they are assured of the only thing they need. They know they are doing as the Lord would have them to do and they know that He is with them. They know that he is attentive to them because He doesn’t sleep nor slumber; God is active in their lives and attentive. The psalmist also uses the language of keep – which means to watch over, and protect. And ultimately, God will keep their lives – from this time and forever.

And, though Psalm 121 doesn’t directly name Him, we know that God will keep His people because we have placed our faith in Jesus – who has promised to never leave us or forsake us. But Jesus never promised that we wouldn’t be called to take a dangerous journey. In fact, he promised the opposite. In John 16:33 Jesus told his disciples that they could expect dangerous times – “tribulation” he called it. But, they should take heart – have courage and be at peace because Christ has overcome the world. In other words, the only assurance that we have in this world is that Christ is with us and it is the only assurance that we need.

You see, God’s people are made for such a time as this because we don’t need the same sort of assurances that others do. Our communities are going to open up. They have to. They need to. It is a dangerous journey we are being asked to take. And God’s people are the best-equipped people to take that journey because the only assurance we need is that one we already have: God is with us.

While we take the recommended steps like wearing makes, washing our hands, and social distancing, we are nevertheless assured that we can step into anything because we belong to the Lord and nothing can take us from His hand – not even a virus, not even death. We are assured He is with us for this time and forevermore. Be strong and courageous – God is with us. 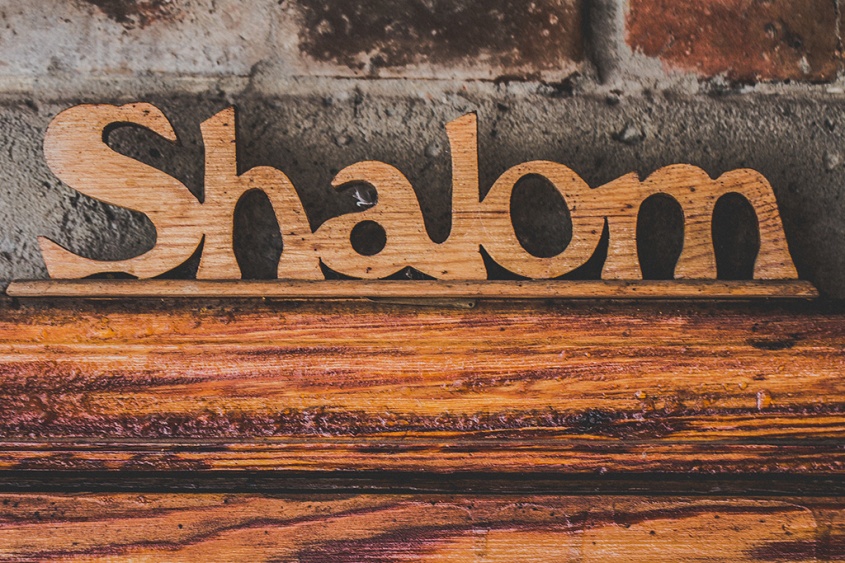